Sorry it’s been so long since I’ve updated.  It’s hard to find time with a little one who is into everything.  We finally got cabinet locks in the kitchen, so Micah darts for the desk drawers whenever I’m at the computer.  I can only be in the office when he’s asleep, which isn’t often enough 🙂

Micah found himself in the hospital again on November 19th and 20th.  His breathing began sounding more raspy on the 18th and by bed time was sounding bad again.  He fell asleep fine, but woke up many times in the night, which meant no sleep for mom and dad.  He was working hard to breathe so in the early morning hours we called our pediatrician.  They told us to go into the ER.  So, back to Children’s I drove at 5:30 AM with Micah crying (still hating the car).  Surprising how bad traffic can be at that hour.  They got us right in and gave him some Albuterol, which he responded to right away.  Within 30 minutes he was sounding great and off to sleep (not his mom though!).  Of course they had to admit us to monitor him, and we ended up staying through to noon on the next day (his sister’s birthday!).  Micah did great in the hospital.  He took the inhaler treatments really well at first, but gradually grew to hate them and flail about.  The doctors essentially say he has asthma (although they can’t officially diagnose until he’s 2).  Thankfully this time we were sent home with an inhaler and he’s been doing well since (although he was on a lot of meds all at once)!

Enjoying being in the hospital crib – it’s big!

Sleeping in the ER 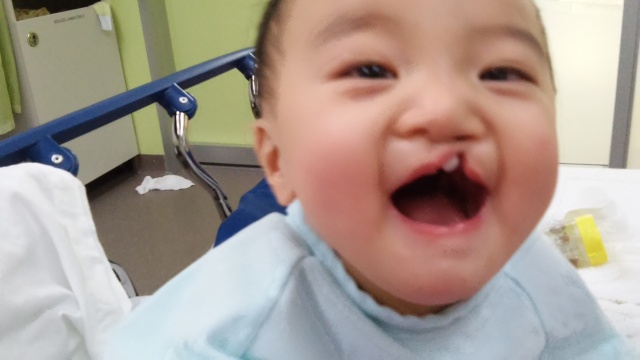 After his first treatment – breathing better! Hard to get a focused photo of a moving baby!

So, Li Li turned 8 last week.  I can’t believe she’s so big!  I often mourn how old my oldest is getting, but number 2 is following right behind him!  She had a fun glow-in-the-dark party with friends, and then just yesterday had a family party (since Micah’s hospital stay delayed it). Her foster family sent her a nice video card by email, and her local family spoiled her, of course. 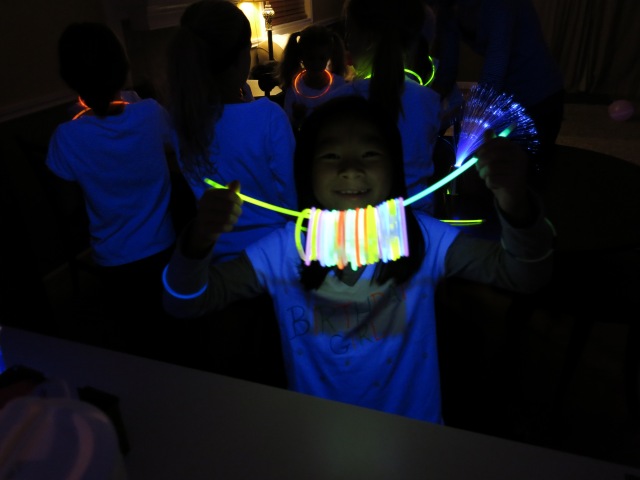 Sundaes – more like a little ice cream with all that candy and whipped cream!

For Thanksgiving we ventured down to Oregon where Keith’s family lives.  I was dreading the trip because usually Micah screams in the car, but he managed to take a nap and stay pretty well occupied both directions, despite the heavy traffic.  He finally got to meet his Gramma and Auntie, and did well there, except in terms of sleep.  Keith and I came out of our “vacation” more tired than going in, but that’s life with a baby, right? 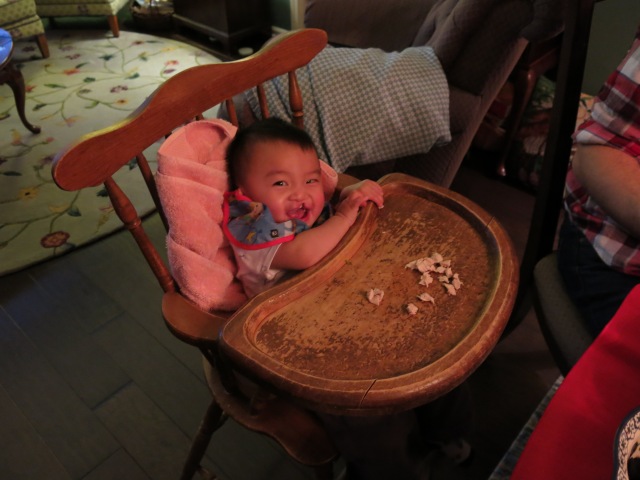 Sitting in the same highchair his daddy did – but needing a towel to help him fit better.

Yummy meal with Gramma and Auntie. 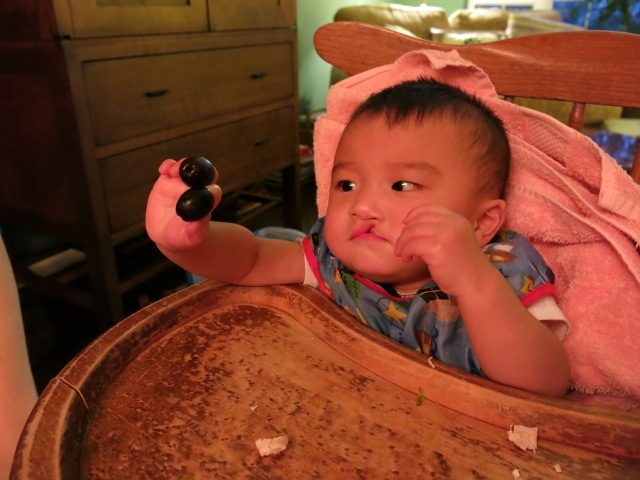 Today I noticed that Micah’s firth lower tooth is poking through – hooray!  I was starting to wonder if he had bottom teeth!  He is also on the verge of walking.  He’s taken a few steps without really realizing it, but when he is aware that no one is helping him, he carefully sits down and then speeds off via his efficient crawl.  He’s so cute from the back, with his little feet swinging side to side.

Last week Micah learned to point to his nose when I said “Where’s Hui Hui’s nose?”  He would point to it and then we’d clap.  Well, somehow now that has morphed into him just skipping the nose part and clapping for himself.  Not quite what I was going for.

He’s responding better to “no” and now stays completely away from the cat food.  That took some time.  Now we’re working on staying away from the wood stove.  It’s been so cold here that I can’t only have it on when he’s in bed.  He’s so curious though – it’s hard.

Keith evened out his hair last week – no more toupee on top.  Makes him look more round.

Bonding is going well – incredibly well.  And even our big kids continue to do great – not complaining at all.  The biggest hardship is when they have to pick up their Legos to keep them away from their little destructive brother.

Next up for Micah – a blood draw tomorrow.  We attempted one last week, but they couldn’t get into the vein well and thought maybe he was dehydrated.  Today I pumped him full of fluids and Keith is taking him in the morning (since I almost fainted twice last time).  Then on Thursday he has an Echo (potentially minor heart murmur), and a visit with the anesthesiologist at Children’s.  His palate surgery had to be pushed back to January because of his last hospital stay.  Next Monday we see his surgeon and the cleft team at Children’s hospital and then next Friday he has his first dentist appointment.  All these appointments have really been disrupting things for us, but Micah is a trooper through them.  Somewhere in there Li Li has a tooth extraction too….And my gallbladder.  I see a the surgeon on Thursday.  When I’m eating carefully, I’m fine, but I’m having a hard time eating right, especially during this holiday season!

We live in WA state and have been traveling the road of adoption since 2/07. We have a biological son who is a joy and look forward to bringing home his sister soon.
View all posts by kelly_e →
This entry was posted in Uncategorized. Bookmark the permalink.